See Remote Attestation Procedures Architecture for definitions of roles and artifacts mentioned below.

During platform provisioning, takes role of Reference Value Provider. It also relies Endorsements saved in TPM, but platform itself isn't an Endorser.

During attestation, platform is an Attester - it collects Claims and produces an Evidence from it.

The only missing role is that of an Endorser. Usually this is TPM manufacturer that installs EK certificate in TPM NVRAM.

In cases when this certificate is not generated by TPM vendor, Endorsement must be created by another entity; this is outside of scope of Fobnail architecture.

The purpose of provisioning is to provide a controlled process for an individual to take ownership and configure the Fobnail. During the provisioning process the token should provide the following information to the provisioner in the form of Certificate Signing Request (CSR):

A token will consider itself provisioned when it is in an unprovisioned state and a provisioner sends it the certificate containing the public key the token generated. keyUsage field in that certificate depends on the actual use case, for example it may be used as an authentication certificate by platform when connecting with a server (e.g. SSH or mTLS). In that use case the platform doesn't know the private key, Fobnail Token performs the initial encryption during handshake. 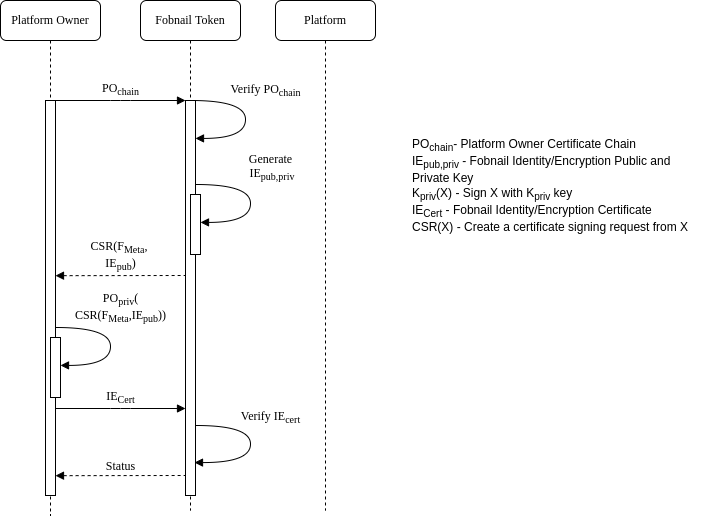 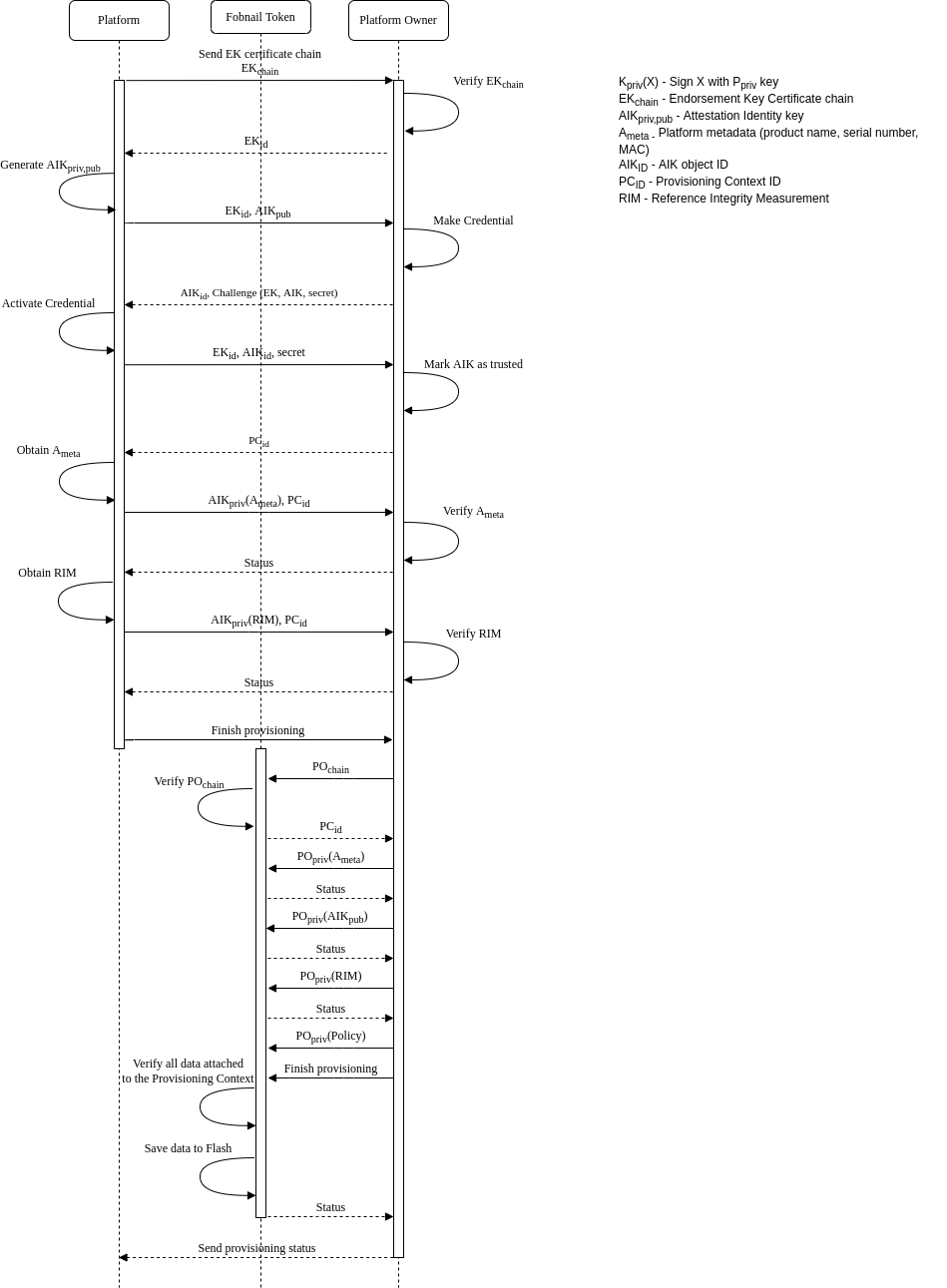 In the case of local provisioning, the Fobnail token takes the platform owner role. The Fobnail token does not receive the policies, and default policies are used during the attestation. 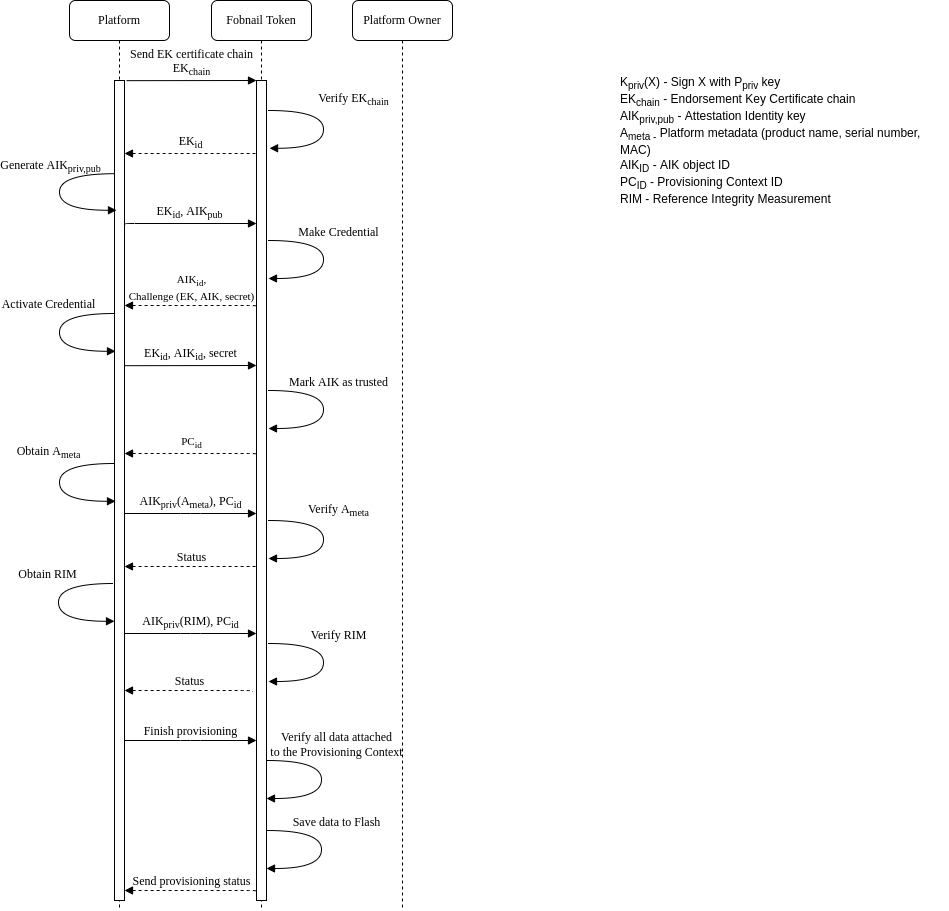 Fobnail role in the attestation of a system is to evaluate an Attestation Token and arrive at a decision whether the attested platform represents a good state. Fobnail is not an enforcement point for this decision and can only provide a physical and digital response to convey its decision. The physical response assumes that a user is monitoring the Fobnail Token and will take appropriate enforcement action(s). A digital response comes in the form of an Authorization Token that is returned back to the system. The assumption here is that the Authorization Token can securely be used by the system to enforce the decision or forwarded to an external entity that can enforce the decision. 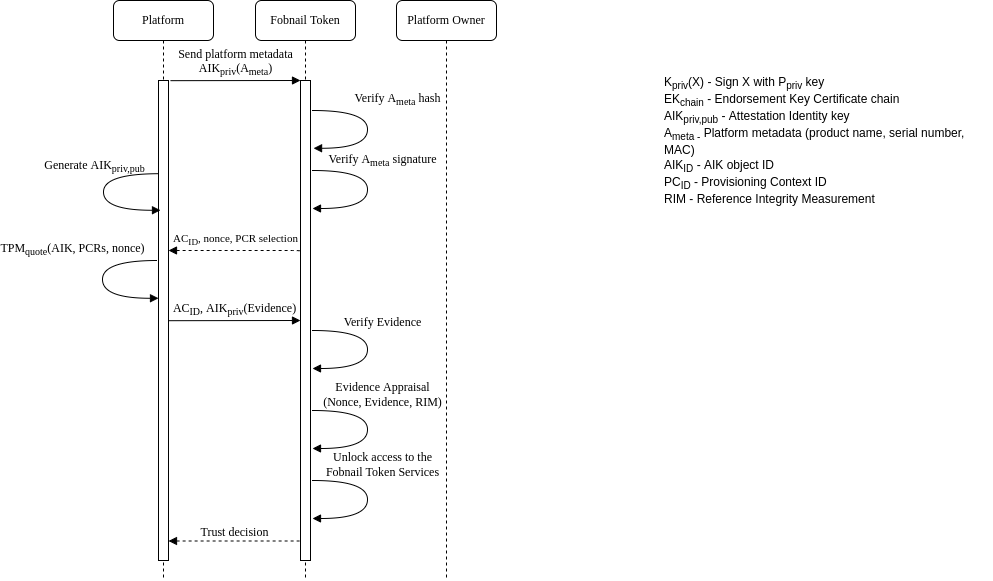 Appraisal policy controls what part of Evidence must match RIM, and what "match" means for a given element of RIM. Sometimes this is exact match (e.g. hash), for other data this may be value relation to reference value (e.g. component version same or newer than that from RIM).

Default policy for Fobnail includes comparison of hashes of PCRs 0-7 and 17-18, for SHA256 bank. It is checked by using TPM2_Quote() command in order to avoid sending true PCR values through potentially insecure channel during attestation, so only hash of concatenation of those values can be intercepted during transit. In addition to PCR selection, Fobnail Token sends nonce that is included in signed response, which protects against replay attacks, and in combination with TPM mechanism against signing external data starting with magic number also proves that Claims and Evidence are fresh.

Reasoning for choosing this particular set of PCRs is that PCR0-7 are used by pre-OS environment, and PCR17-18 are used in DRTM flow. Other registers are used by OS and may change after software is updated, which would require frequent re-provisioning of platform. SHA256 is the only algorithm commonly used - SHA1 is deprecated and SHA384, while mandatory according to latest TPM specification, is not implemented by majority of available TPMs.

In addition to configurable part of policy described above, there are also implicit assumptions: